“Are not all angels ministering spirits sent to serve those who will inherit salvation?” (Hebrews 1:14).

From Paul’s words in Ephesians 3:14,15 we discover that God has family on earth and in heaven. The subject of angels appears over 300 times in 34 books of the Bible. The spiritual/heavenly realm is where angels dwell as they receive their instructions from God for service to humanity. Angels are created beings according to David in Psalm 148:2-5. Angels have not always existed. These celestial beings apparently were created eternal rather than mortal. What is especially encouraging about angels is that they are ministers involved in serving us. God loves us so much that he has ministering spirits involved in our welfare. Angels, and humans, were created for the Lord’s good pleasure.

Angels are superior to humans in some ways. Jesus in human flesh existed in a lower state than angels (Hebrews 2:7). At funerals we hear that a child snatched in innocence is now one of God’s little angels. Another speaks of their guardian angel, a concept that seems to have some support in scripture. “See that you do not look down on one of these little ones. For I tell you that their angels in heaven always see the face of my Father in heaven” (Matthew 10:10). Angels are appealed to in benevolence. I have often been told to help everyone who comes calling for a handout just in case I might be confronted with an angel unawares. The way I figure it, if an angel is working my neighborhood, God has probably provided them an expense account.

Fallen Angels
That we acknowledge them is good, for it establishes in our minds that we do actually believe in the spiritual realm. There is an unseen existence out there apart from time and space as we know it. God dwells there. Angels operate there. Apparently demons do as well. If Satan is a fallen angel, and demons are his minions who followed his rebellion, then we may assume that angels had a probation period and free will at one time, just as humans do. However, we do not have adequate space to develop the concept of Satan except in passing.

Angels, as with all of God’s original creation, were a part of the very good design. Jesus tells us angels are asexual creatures (Matthew 22:30). They are not into the procreation business apparently. Angels are neither male nor female, though they usually appeared in human form as males. Angels have supernatural strength. Some angels, in their probation and rebellion, paid a great price. “And the angels who did not keep their positions of authority but abandoned their own home—these he kept in darkness, bound with everlasting chains for judgment on the great Day” (Jude 6). Peter speaks to this as well. “For God did not spare angels when they sinned, but sent them to hell [Tartarus], putting them in gloomy dungeons to be held for judgment” (2 Peter 2:4). It seems to me hell was created for the devil in light of Jesus’ words “depart from me, you who are cursed, into the eternal fire prepared for the devil and his angels” (Matthew 25:41). Also see: The Nephilim: Did Angels Have Children With Humans?

The Nature of Angels
Angels have an interest in matters relating to the gospel (1 Peter 1:12). Thus, they are not all-knowing. Perhaps they are inquisitive just as we are. We do know they are beings able to be filled with joy as they were when they witnessed the creation (Job 38:7). The heavenly beings worship God (Deuteronomy 32:43). Since angels are emotional beings, we can identify with them more readily as believers. They are messengers of God, not unlike Christians. The last book of the Old Testament is the very word for angel or messenger. Angels apparently have super- human mental abilities (2 Samuel 14:20b).

We know angels had super-human strength. Our Lord could have called legions of angels to do his bidding. In a single night an angel of the Lord killed 185,000 enemy Assyrians (2 Kings 19:35). Angels seem to be innumerable (Hebrews 12:22). In one revelation to John he saw “ten thousand times ten thousand” angels. Angels apparently are not constrained by time or space. If children have angels, perhaps adults do as well. Though heavenly creatures, angels are not confined and may minister to humans in various ways, as they did with our Lord. “An angel from heaven appeared to him and strengthened him” (Luke 22:43). Rhoda thought it was Peter’s angel knocking at the door. It was an angel of God who freed Peter from prison and escorted him out (Acts 12).

Some think we become angels at death. Jesus said we will be “like” angels. But John also tells us that when Jesus returns we will be like he is. How does one know when an angels is present? Maybe we don’t. Abraham didn’t seem to always know when he was entertaining angels (Hebrews 13:2). The angels who rolled the stone away from the tomb were recognizable as spiritual beings (Matthew 28:3). Not all angels appear incognito. Paul suggests to us that angels may even have their own language (1 Corinthians 13).

Classifications of Angels
Need we determine the difference between a cherubim and seraphim? Perhaps not. Maybe such creatures are not technically angels at all. They aren’t called angels. Cherubim were beings placed on each side of Eden with flaming swords to guard the tree of life (Genesis 3:24). We assume them as angels.

Their images adorned the Ark of the Covenant in hammered gold and also in the curtain of the tabernacle. From passages such as Ezekiel 1:5-14 and Psalm 80:1 we might readily assume cherubim served somewhat as guards. Cherubim are alluded to in 13 books of the Bible. They are being of action, with features of a man, a lion, an ox and an eagle. They are said to perceive and act so speedily that no time appears to elapse between the giving of a command and its execution.

Seraphim are mentioned only in Isaiah 6:1-6, and perhaps in Revelation.

Michael is his name. He is the archangel. Perhaps we could liken him to the head of our Joint Chiefs of Staff at the Pentagon. He’s the five-star general of heaven who when disputing with the devil about the body of Moses did not dare to slander even him, but said, “The Lord rebuke you!” (Jude 9).

Don’t even ask me what that account means. We know there was war in heaven somehow with Michael engaged in spiritual warfare with the dragon (Revelation 12:7). This great angel will be involved in the Lord’s second-coming. We will hear his voice and the trump of God at that last great day (1 Thessalonians 4:16,17). It is probably to our own good that we do not know more about the “pecking order” of angels, with our mortal proclivities for worshipping beings other than God.

Gabriel is his name. He explains a vision in Daneil 8:16. Luke has him delivering the good news concerning the birth of Jesus’ cousin, John the baptist, and that of Jesus as well. Gabriel seems to be sort of an “announcing” angel. We might harmlessly think that all angels have names and personal identity. It would give them “personhood” just as our names add to what we are as individuals.

Working Angels
I doubt angels have a union. They seem to be natural/supernatural laborers. Angels are standing guard at the gates of the Holy City. Seraphs worshipped. Angels deliver messages. Angels are dispatched by God to execute judgment.

Angels warned of Sodom’s destruction (Genesis 19:15). After 70,000 people died from plague, God told the destroying angel to withdraw his hand. David saw an angel punishing the disobedient (2 Samuel 24:16). Angels control nature, able to hold back the four wins (Revelation 7:1). They can turn the sea to blood (Revelation 24:16).

At our Savior’s return angels will become the harvesters of souls for eternity (Matthew 24:31). In his parable of the weeds Jesus has the angels separating the wheat from the tares. Angels will burn up the weeds that represent the wicked and unbelieving. Angels minister to Christians (Hebrews 1:14) and to little children. We even seen angels involved in the ministry of the gospel, for it was an angel who called Philip from one place to another so that he might teach the eunuch about Jesus (Acts 8:26). An angel was involved in Cornelius’ conversion (Acts 10).

Conclusions on Angels
If Michael was concerned with the body of Moses, it seems likely these heavenly beings are still concerned with our lives and futures. Angels are real. That we do not see them, or are unaware of it when we do, does not mean they are not among us. They are spiritual beings created by God the Father to do his bidding and to assist us who walk in the light of God’s word. They are not to be worshiped, but surely they are to be acknowledged. Jesus exercised great restraint when he refused to call down legions of angels to stop the horrendous crucifixion at Calvary. With that kind of power at his command, he willingly gave himself for us to cover our sins. What a glorious gift salvation is. Angels minister among us. They are God’s faithful spirit beings. Some day we will be like them. Forever beings. Living in the presence of Almighty God. Rejoicing with them in our mutual eternalness. 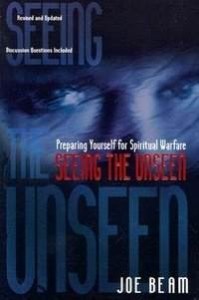 Seeing The Unseen: Preparing Yourself For Spiritual Warfare

This book describes, in a way you won’t find anywhere else, the unseen world around us. The world of angels, the spiritual forces that are invisibly at work and how prayer is involved. In this newly revised and updated bestseller, Joe Beam reveal Satan’s powerful weaponry — his lies, deceptions, and manipulations — and unmasks his strategy to destroy your life and those you care for. This is not a book of wild sensationalism; rather, it is a dedicated study of God’s Word and a sharing of stories of tragedy and triumph.  BUY NOW!